Spring has arrived and true to its nature the first weekend of spring was perhaps the coldest weekend of the year, but a lot of golfers will still tell you that it is still better to play golf than to go shopping.

Ruan De Smidt is having a good run now and we hope he keeps it up. In his last couple of tournaments, he has achieved the following results:

Now he is lying 6th on the road to the Sunshine Tour and out of the top six he has played the least number of tournaments. You GO lad.

The IGT Tournament is making a return to our club on the 21st October so if you are at a loose end during that week, make a turn at the club and see how the other half play our course.

The last weekend in August was a very significant weekend at our club with the club weekend being run over this period. The weekend started with the meat competition on the Friday afternoon, the prizes were sponsored by Frank Poulter. Thanks, a stack Frank, let’s hope this tradition carries on. Captain’s draw was held on Friday evening. This was extremely well attended with Mark Beling providing the entertainment until late into the night. Unfortunately, the jackpot was not won on the evening and is now carried over to the following draw. The jackpot is now standing at R25000.

A BIG THANK YOU GOES OUT TO ALL THE MEMBERS WHO SUPPORTED THIS WEEKEND.

See you at our next Captain’s draw – 27th September.

The Saturday morning field was fully booked and everyone one had a wonderful time. The crafts market and tea garden were also well attended and enjoyed by all.

The festivities carried on through the Saturday afternoon and Sunday morning field.

The club weekend was well supported by the club members and the feeling is that it be held on a more regular basis.

A Beerfest is planned for the near future so watch the press and please support the committee.

Junior League:
Unfortunately, our juniors did not feature too well in the league, but it is always encouraging to see them out on the course.

Mid Am League:
Our Mid Am team have finished very well and have managed to finish second in the league which will earn them promotion to the A Division next season. Well done guys.

Scratch League A Side:
Our scratch league A side play in the C Division and are still on top of the league with two games to go, let’s hope they can maintain their position and earn promotion to the B Division.

Scratch League B Side:
Our scratch league B side competes in the D Division and should be able to keep their position in the middle of the table.

Ladies Sunday League:
Our ladies Sunday league have managed to finish second in their league and have played very well during the season losing some games by very small margins most of the time.

Several changes have happened at the club and we hope that all you members have noticed them and that you like them. Most of the feedback received regarding the new colour scheme of the club has been very positive and we wish the committee all the best for the future and hope that they can raise our club to the heights that it deserves.

Our ladies section held their spring day on Saturday the 7th September and lots of fun was had by all. Every fourball had to dress for the occasion and one of the best that I managed to see were the girls below. 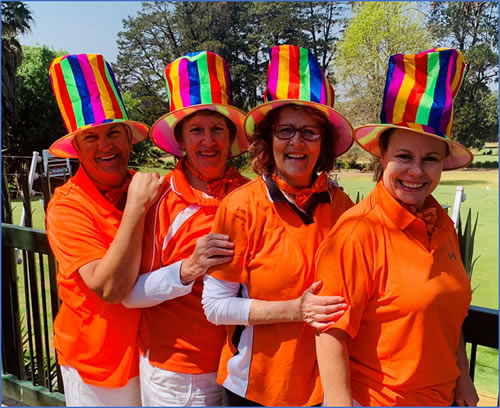 Before I go, I would just like to say a huge THANK YOU to the TeeTotallers. These are a group of golfers who play at our club every Sunday morning and without them our Sunday morning would be rather empty. Every Sunday you will see these “purple people eaters” playing at our club, normally at least four to six fourballs. They are run by the brother and sister duo of Greg Douglas and Michelle Edwards, thanks a stack guys and girls and let’s hope that you feature forever.

Below a few TT’s enjoying a drink after their game. 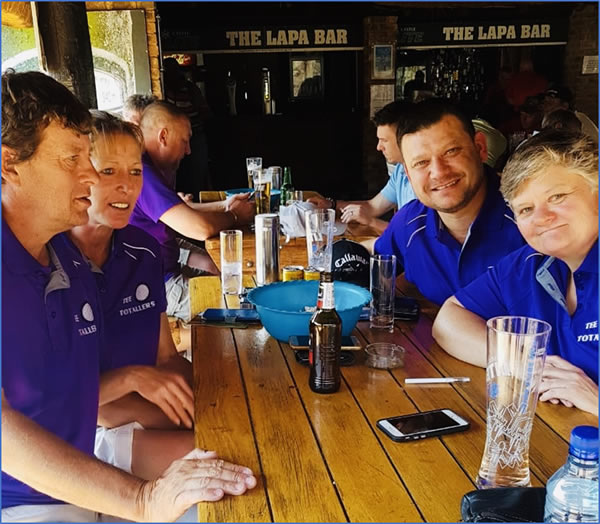 Happy birthday to all our members who celebrate their birthdays during the month of September. 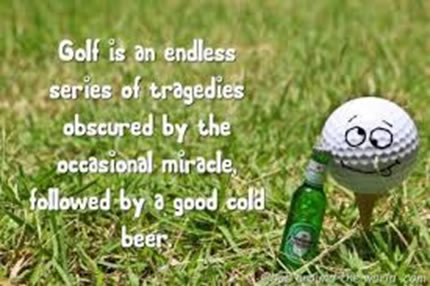